History of the Oklawaha Greenway

In 1999, the newly formed Apple Country Greenways Commission started the Oklawaha Greenway as a demonstration project, which was expanded as three separate pieces. Earlier, a steering committee had considered two possibilities: 1) connecting Blue Ridge Community College to Jackson Park to downtown, and 2) a greenway along Mud Creek (Oklawaha) to be built in phases. The demonstration greenway from Jackson Park to Seventh Avenue (along Mud Creek) was selected as the easiest place to start. It was named Phase I of the Oklawaha Greenway, and opened to the public in October 2004. 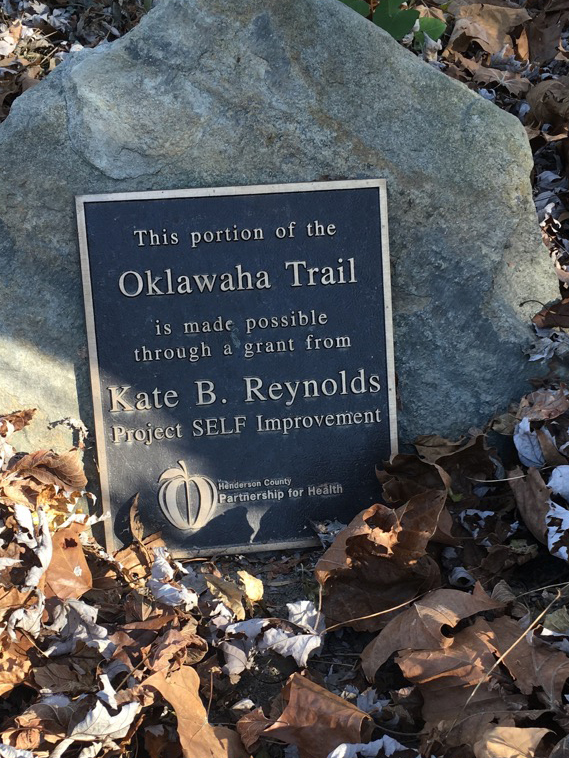 Also during this time the Environmental and Conservation Organization (ECO, now MountainTrue) sponsored the Golden Spoke/Golden Sneakers award in alternating years to promote use of the Greenway by bicyclists and walkers/runners. Tim Hopkin was the proud recipient of a Golden Spoke in approximately 2001.

See the newspaper image larger. It will open in a new window.

Phase II of the Oklawaha Greenway, from Seventh Avenue to Patton Park, opened in 2009 with 1.1 miles of greenway. The total cost was $687,472. Of that total, $400,000 came from N.C. Department of Transportation enhancement funds, and the remaining $287,472 came from the City of Hendersonville.

In 2013, the City of Hendersonville received a $1.2 million federal grant to extend the Oklawaha Greenway along a new sewer easement from Patton Park to Berkeley Mills Park (Phase III). Federal funds which support bicycle and pedestrian improvement projects paid for most of the project, with some state transportation funds as well. The Kimberly Clark Corporation donated several acres of land for Phase III. It opened in July 2016, providing 1.5 miles of greenway, making the total Greenway length 3.25 miles.

In June of 2015 the City of Hendersonville conducted an automated count of Greenway usage at a single location south of Patton Park. Among the results: During the peak (maximum) 2-hour period, more than 100 people passed the counting point. Read the report.